The Power of a True Champion’s Words 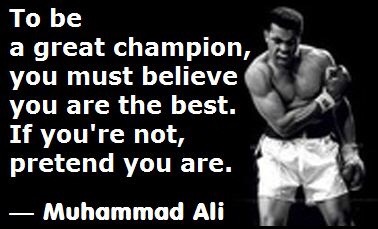 Whenever I feel less than confident, I pull up a poem by one of the most egotistical and bombastic persons who has ever walked this Earth…Muhammad Ali.

This three time world champion heavyweight boxer was a master at attempting to intimidate his opponents with his powerful words. I don’t know if his crazy statements really worked on his adversaries, but they sure work for me. Here’s one of my favorites:
“I’ve wrestled with alligators,I’ve tussled with a whale.I done handcuffed lightningAnd throw thunder in jail.
You know I’m bad.
Just last week,
I murdered a rock,
Injured a stone,

Every time I read this over-the-top proclamation, I chuckle. But you know, it works its magic by somehow making me instantly feel more buoyant, confident and alive.

The power of words are real.

Make them work for you.